‘Am I Going To Make It Here?’: An Iranian Woman’s Search For Success In America

Adjusting to a new place can be a challenge for anyone, let alone a new country. In this story, Hedieh Khajavi shares how she felt being immersed in American culture but, keeping Iran close to her heart.
Twenty-seven-year-old Hedieh Khajavi arrived in Houston on July 28, 1998. That day, she worried she might not be allowed to enter the United States. Was she going to start a new life in America or have to fly back home?

At the airport, Khajavi made her way to the front of the line. She was eager to get final entry from the customs officer. When the man in the blue uniform looked at her passport and visa, he paused momentarily before throwing it to the next lane for secondary inspection.

Khajavi was nervous and confused in this new strange place. And in her rush to queue up, she had gotten in the wrong line. He told her she would have to be questioned separately.

Khajavi was afraid of what might happen. While she waited to be interviewed, she was seated next to a man in handcuffs.

Khajavi reflects that she could have taken this as a “bad sign.” But she lost all worry when she was finally cleared to enter the United States and reunite with her brother.

Khajavi’s trip would have been impossible today. Iranian citizens can’t get tourist visas to come to the United States anymore.

Within weeks of President Donald Trump’s inauguration, the administration created a ban that restricts travel to the United States by people from seven predominantly Muslim countries. That ban has been challenged in court and has taken several iterations, according to the United States Citizenship and Immigration Services. Even in newer versions, Iran has stayed on the banned list each time.

Now, 20 years after Khajavi first touched down in Houston, she and her brother are both U.S. citizens. The travel ban doesn’t affect their status, but it does affect the siblings’ ability to bring their 80-year-old father to live in the U.S. with them.

Their father is the only member of her immediate family still living in Iran. The two siblings make trips to Tehran as often as they can. In the past year and a half since their mother died, Khajavi and her brother have visited their father about five times.

Khajavi knows others that have faced similar hardships with their families. She says she’s met Iranians who are political asylees and can never return to Iran under the current regime. 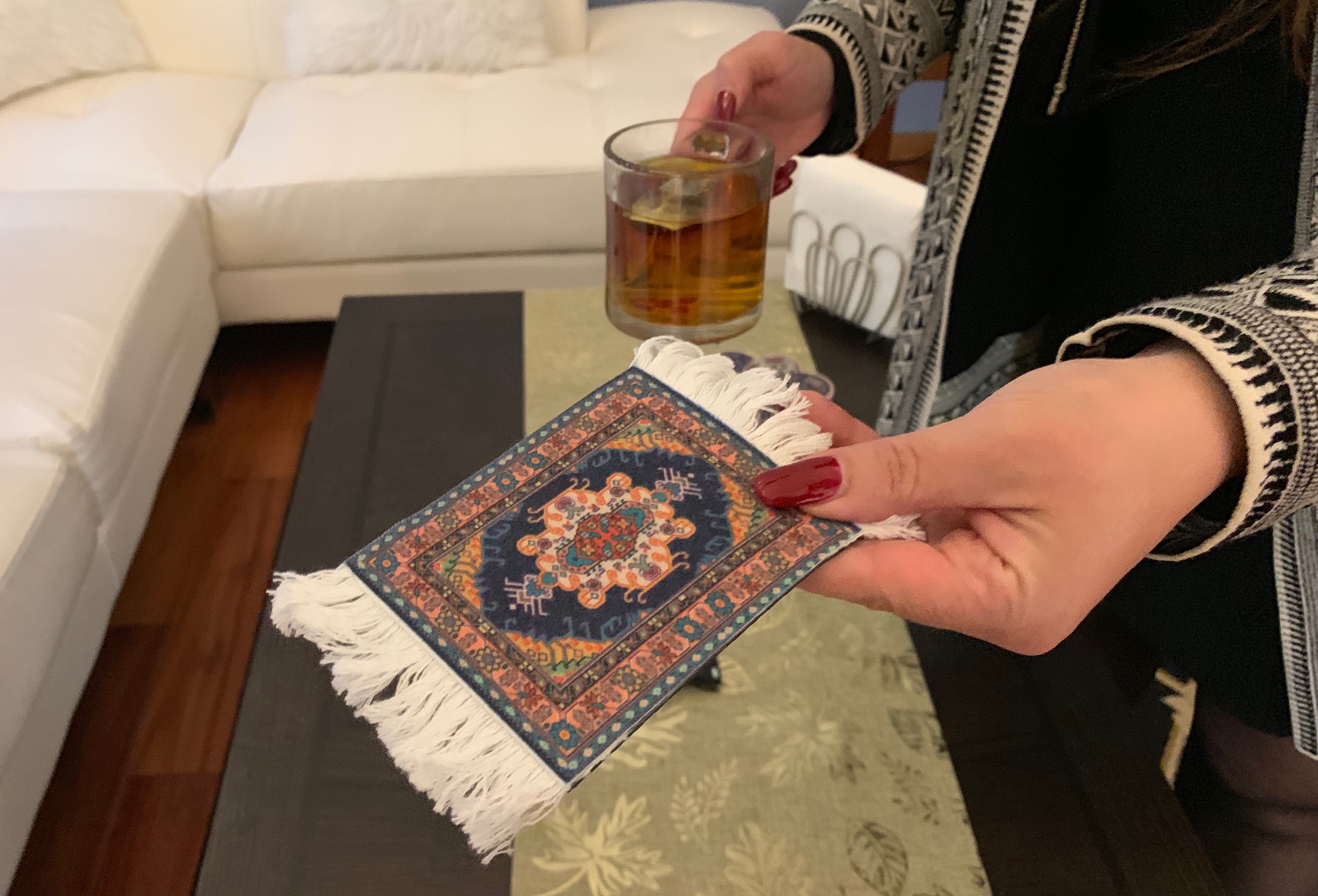 Hedieh Khajavi uses a Persian rug coaster that she bought in Iran from a recent trip back home. Khajavi had always planned on immigrating to America to study. But, coming to terms with her new environment turned out to be the hardest lesson of all.
“I know people that their parents passed away in Iran. They were not able to see their parents and go to their funerals because of fear of prosecution… So I’m one of the fortunate ones that I’m able to go back,” said Khajavi.

Thankfully, her father could apply for a special waiver (I-130, Petition for Alien Relative form). As a U.S. citizen, Khajavi’s brother is sponsoring their father’s application to come the U.S. They believe their father’s American education aided them in meeting the waiver criteria.

However, his waiver is still being reviewed by the United States Embassy after his file was completed. Khajavi’s father had an interview with the United States consulate in Armenia and received the news that he qualifies. Now, it’s a waiting game for the Khajavi family.

According to Yusra Khafagi with the immigration department at Council of American-Islamic Relations Los Angeles, these types of waivers are often denied unless it’s an extreme case, like life-threatening illness.

“The terms for the I-130 form’s approval is vague,” said Khafagi.

Khajavi is uncertain about how the process will end.

“The scary part about immigration is the constant changes in law,” said Khajavi. “Which [is] the unpredictability of it.”

The near unattainable documents requested and strict deadlines have Khajavi convinced that the process was designed at this level of difficulty to push applicants to give up before they’ve received their waivers.

Filling out the documents discouraged her, at times, from following through with the process.

“Sometimes a reason for giving up for me was mainly the documents… I was like are you kidding me, who sat down to even request these,” said Khajavi. “They didn’t make any logical sense to me.”

Khajavi doesn’t want her father to feel the loneliness that she had felt when she first came to America.

Aside from the obstacles Khajavi encountered during her immigration process, she remains optimistic and hopeful regarding her father’s status receiving the immigration waiver. She hopes to see her father arrive at an American airport, like she did 20 years ago, and get to reunite with his family.