What is the cost of going overseas to provide for your family? An Indonesian mother left behind her newborn son for America, where she faced ongoing accounts of exploitation — from labor trafficking to sweatshops in L.A. Despite working tirelessly for her son, he now considers her a stranger.

“I [felt] I was inside a movie — I listened to different languages, smelled different smells; everything [was] strange for me.”

That’s what Yeni Dewi thought as she arrived at LAX in Los Angeles, but she carried a heavy weight on her shoulders.

Back in Indonesia was her two-week-old son — she had just broken ties with her partner, and as a single mother, followed her employer to the U.S to continue working as a domestic worker.

Dewi entrusted all of her documents to the family — including her passport and birth certificate — with the promise of a work permit in due time. It wasn’t long before a promised job at a restaurant, $1000 a month and a room of her own became 17-hour days as a domestic worker, $200 a month, and a spot in the employer’s child’s bedroom.

A case of labor trafficking tucked into an affluent Los Angeles neighborhood, Dewi is just one labor trafficking survivor given a false promise of fair employment. In 2018, the U.S. Department of State identified 5,801 victims of trafficking from Indonesia.

After six months of working 17-hour days, Dewi knew she had to leave.

The desperation led to an escape — a decision mentally planned, yet seemingly casual in execution. Once the father of the family’s two kids arrived home from work, she walked out.

“In my sandals!” she remembers.

After finding a pay phone, Dewi called the only number she had: the family’s former nanny.  She picked up Dewi from the Bloomingdales’ parking lot, and drove to her brother-in-law’s home in South Los Angeles, away from the bounds of her employers.

“The Mexican family [gave] food, the clothing, blanket, and sofa where I [slept]. They asked me what I want to do — call the police, go to the Indonesian embassy. I [said] I don’t want nothing — I only want work. I have to work, cause I have my son, and my mom over there in my country. Then, they drop me to the two blocks over, on Slauson and Broadway, to a small company in the garment industry.”

I said I don’t want nothing — I only want work. I have to work, because I have my son, and my mom over there in my country.

Dewi arrived in downtown Los Angeles on a Sunday. On Monday, she found herself working in LA’s garment industry.

With an unnoticed presence, the cut and sew apparel industry is Los Angeles’ second largest industry, employing over 46,000 individuals. Woven into the fabric of the city, workers of this economy are inextricably tied to the undocumented community, making the industry notorious for wage theft, worker intimidation, and poor health and safety conditions.

However, for Dewi, the $125 paycheck each week for eight hour days felt like a respite after her previous employer.

It’s been eight years since Dewi began work in the garment district, and her life has changed drastically.

Although still employed by the garment industry, she’s become a leading voice within anti-sweatshop activism. She met her husband, Miguel, and has two young kids: Aztlan, 5, and Luna, 2. 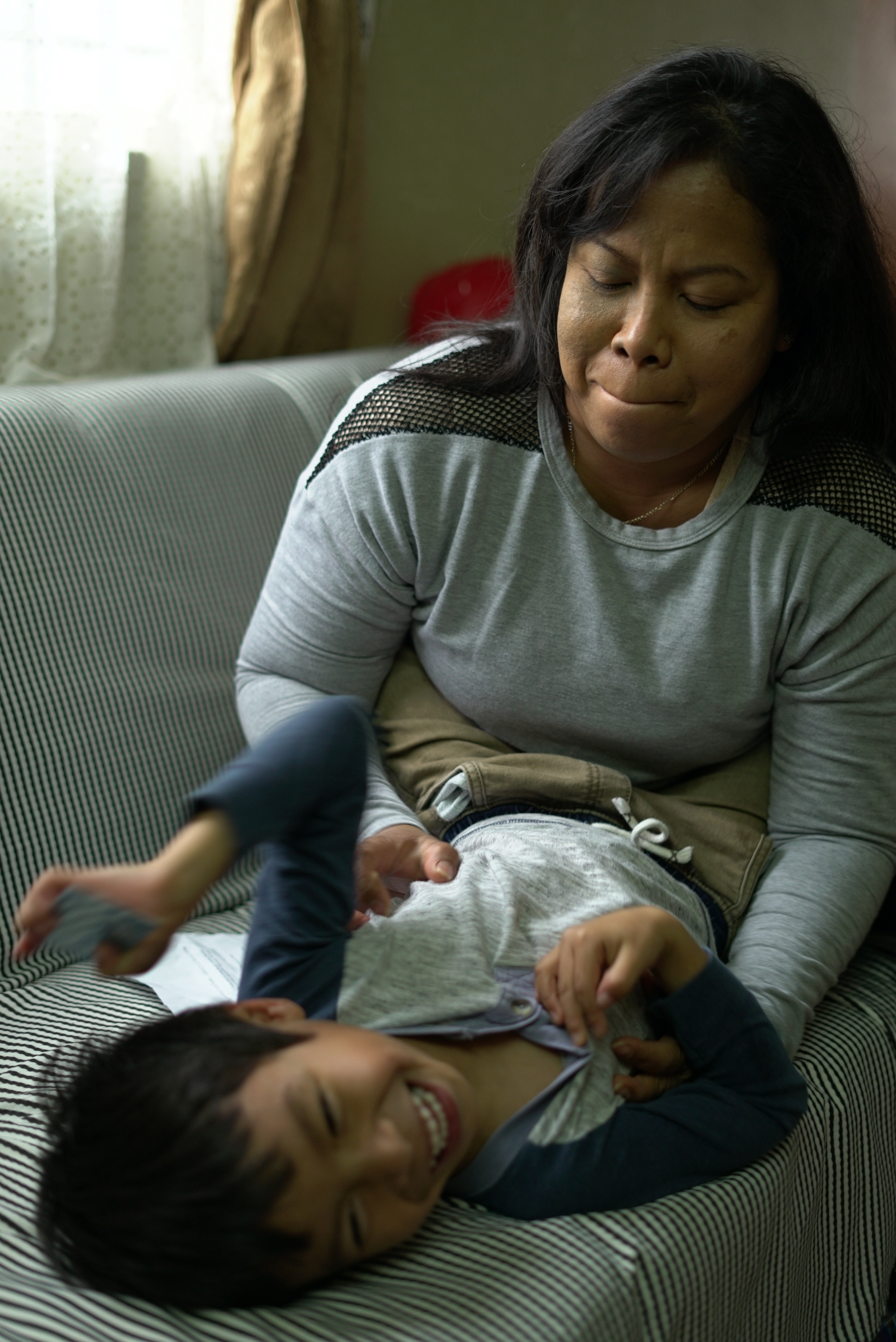 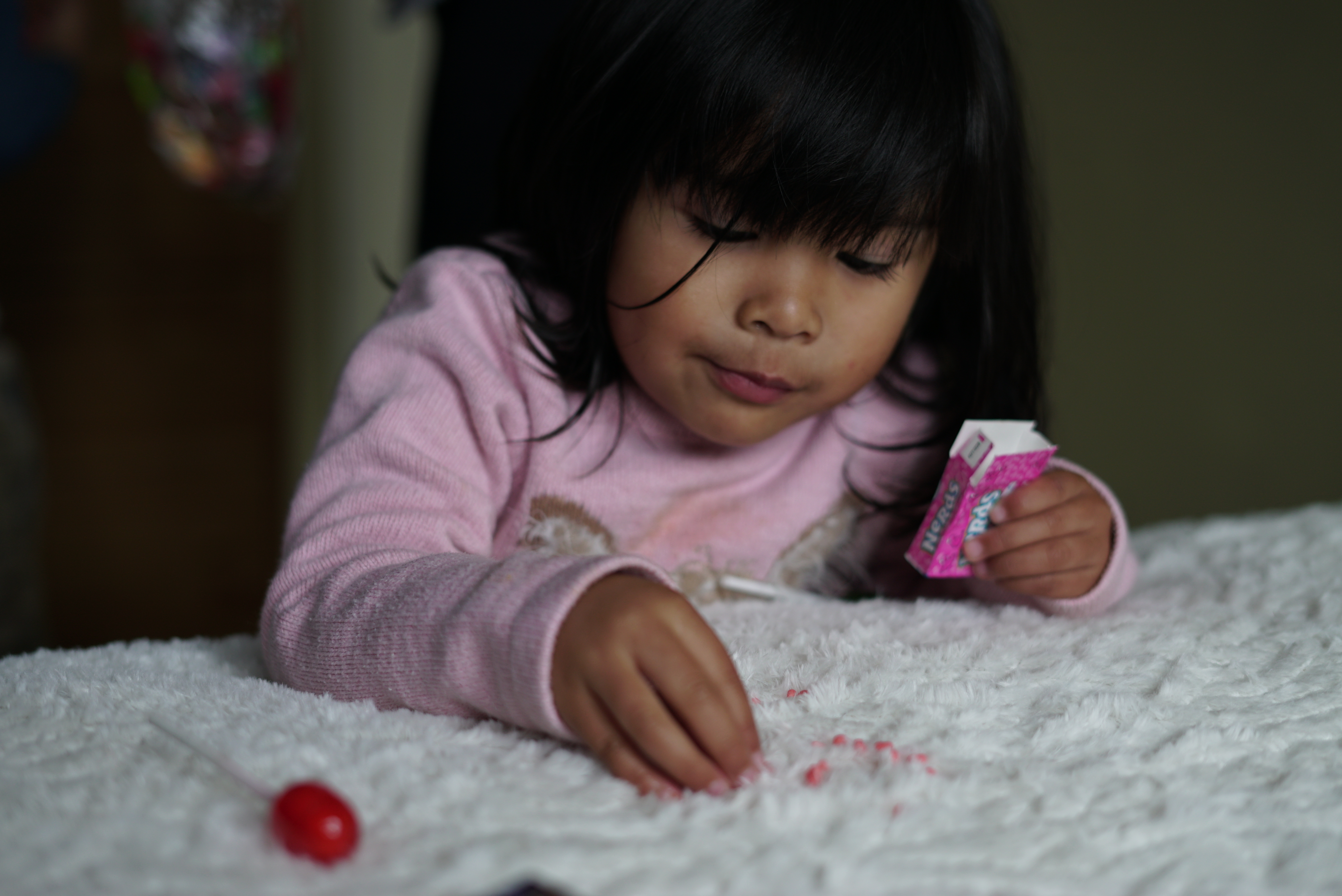 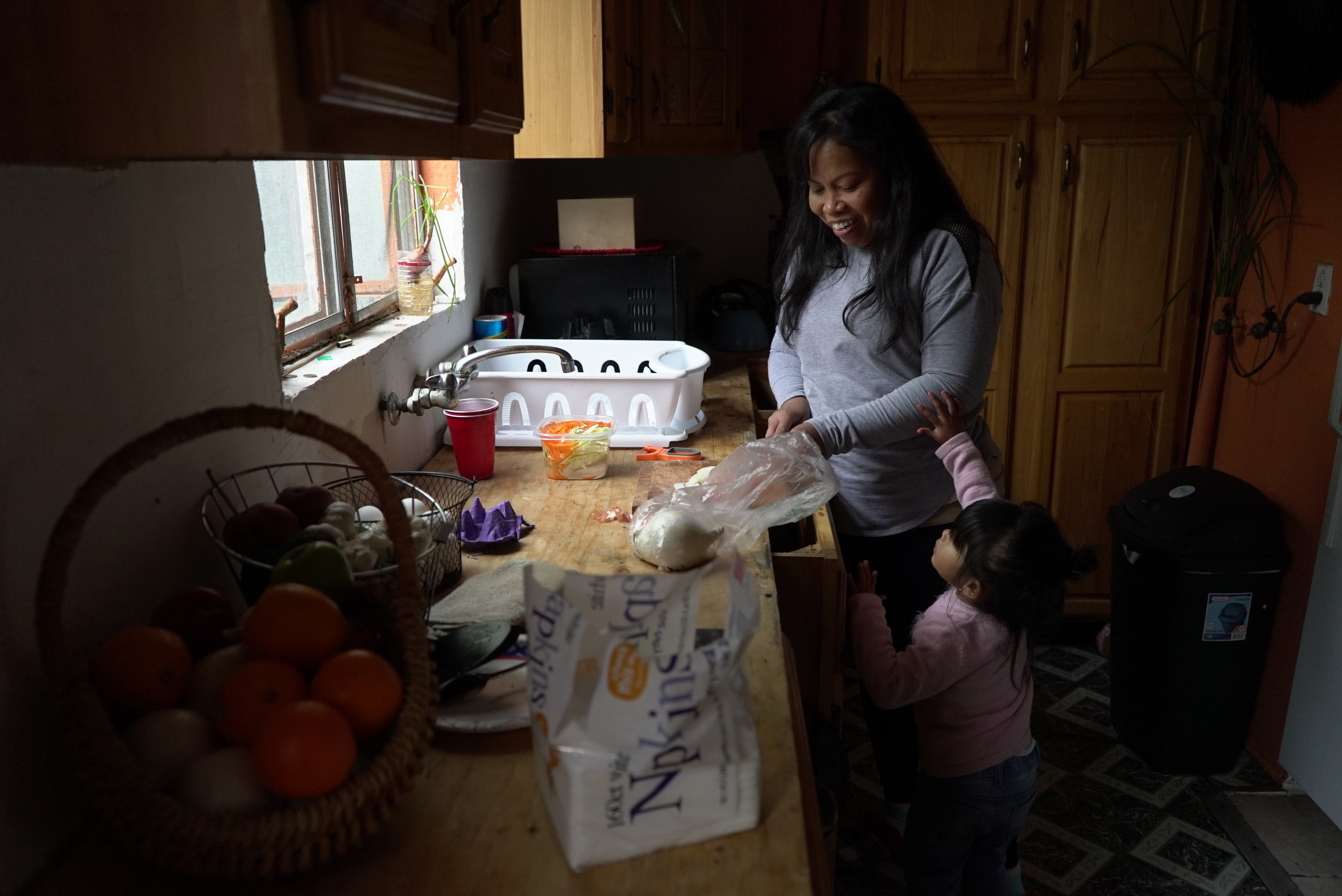 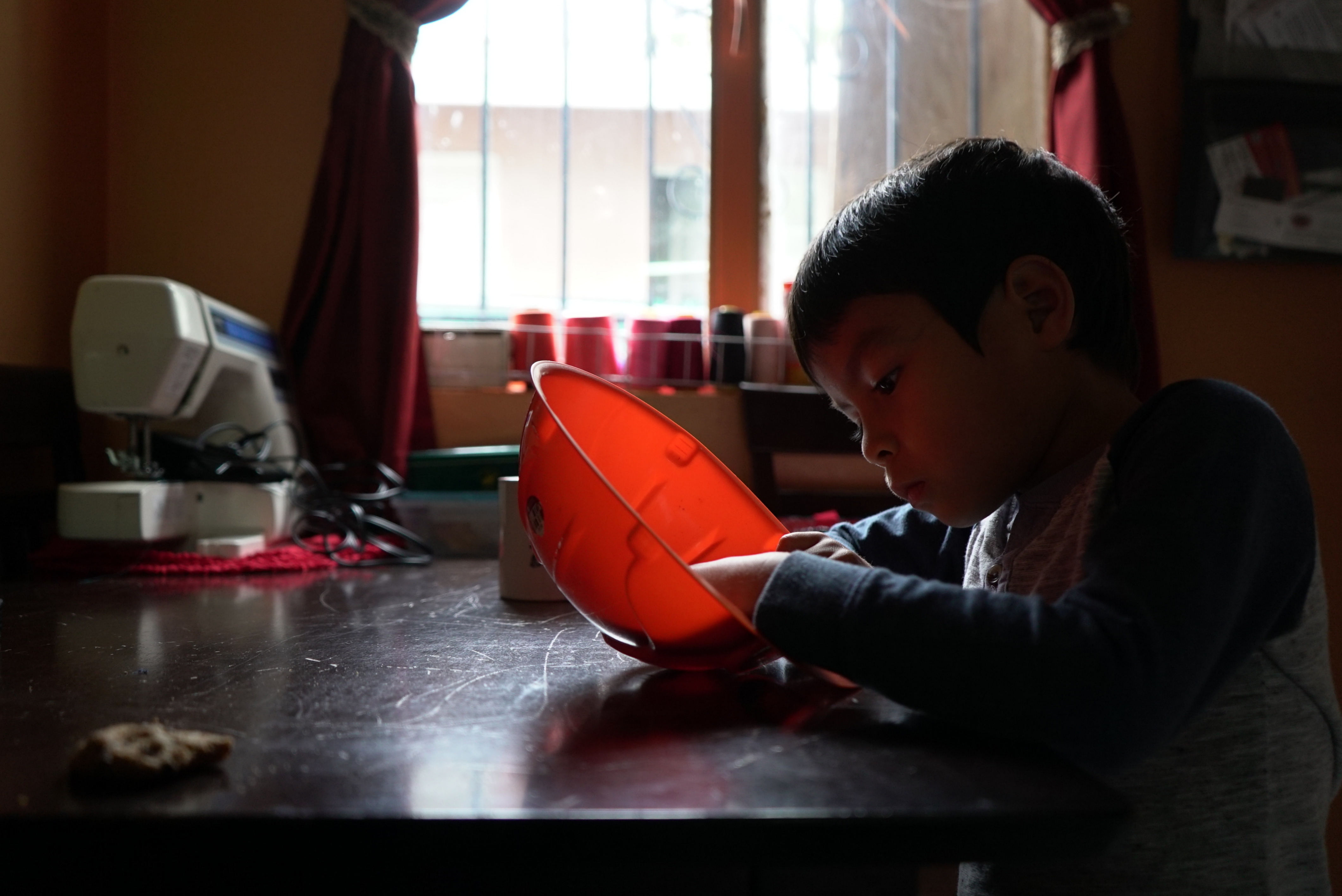 In front of his mother’s sewing machine, Aztlan tears away at a sticker. (Aditi Mayer, Next Generation Radio)

Ibnu, Dewi’s first-born son in Indonesia is now 9 years old. She’s faced new challenges with her oldest son: while she left to provide for him financially, she has become emotionally estranged. Last year, Dewi received her human trafficking visa, which gave her the option of family reunification.

“I try to make talk Ibnu but he don’t want it. Ibnu never know me. Ibnu never know father and mother. Ibnu living with my mom so he thinking we are stranger. He asking my mom, ‘Where is my dad? Where is my mom?’ When my mom explain him, your dad and mom in the U.S., he say ‘Why my mom and my dad don’t want to hug me? Don’t go to sleep with me?’”

Dewi’s nervous about the future. She knows things will be tough for her son, but she’s determined to let Ibnu finally experience the love of a mother and father.

“I was keep my dream for a long, long, long, long ago to hug him. I keep everything like, say Happy Birthday to you, and hug him, personally … I keep like 9 years. Every single year — I keep it. This year will take it, I will hug you until night time. Maybe in the 10th year, I can hug him on his birthday.” 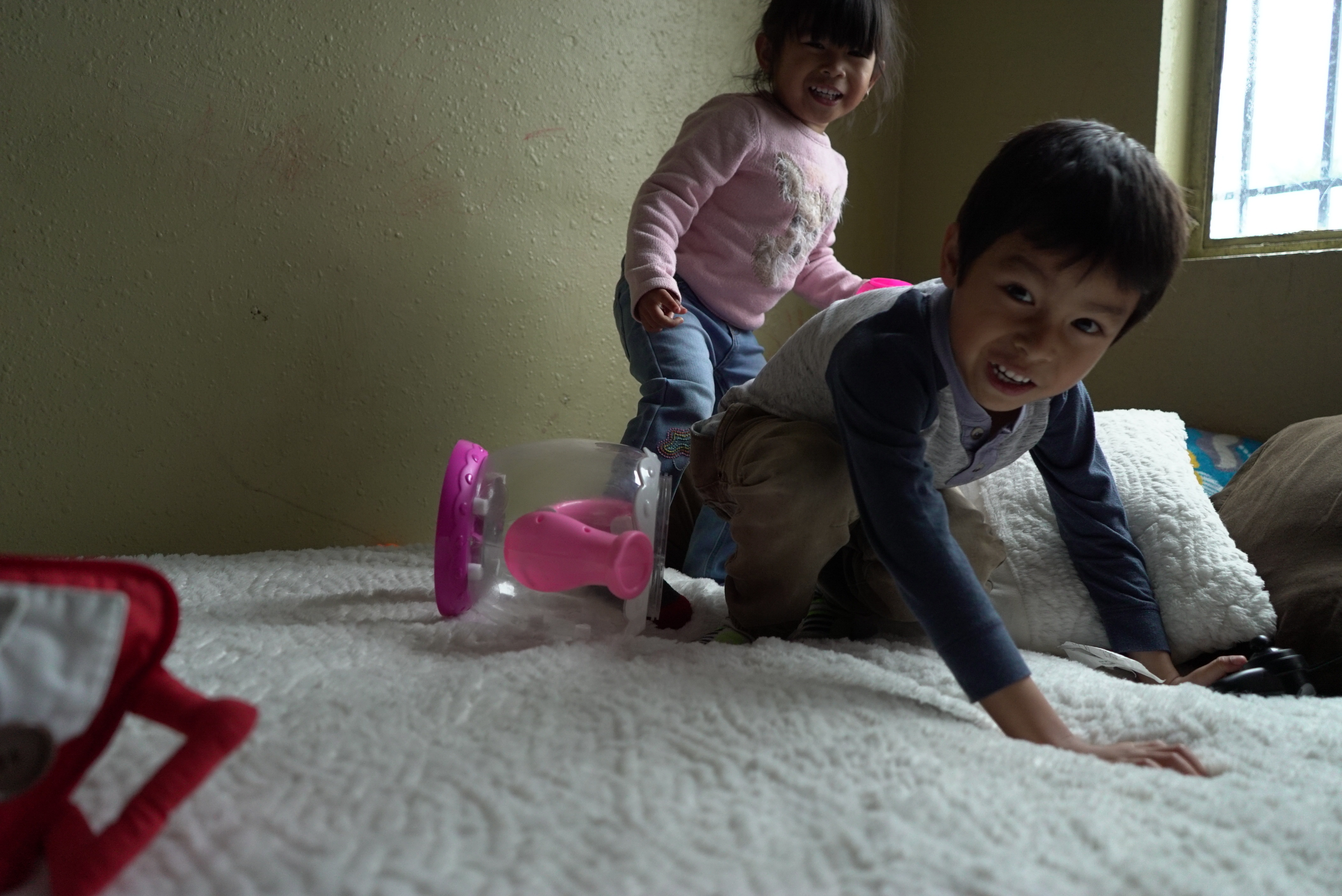 Luna and Aztlan play in the family’s bedroom. Later this year, they will be joined by their stepbrother Ibnu. (Aditi Mayer, Next Generation Radio)